Feeling old, tired, and out of shape, I turned to Loyalty Fitness 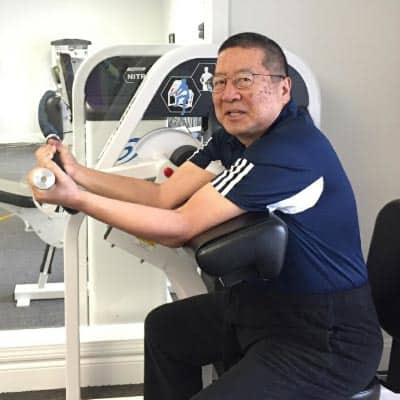 Originally came to Loyalty Fitness because he was feeling old, tired and out of shape working at a desk all day.

IN ONLY ONE 30 MINUTE WORKOUT PER WEEK:

-David has increased his strength dramatically, which is noticeable in everything he does.

-A longtime tennis player, his added leg strength now enables him to run, move and get to the ball faster. As a result, he is now regularly playing in USTA matches and in fact, at age 65, sometimes competes in the 50+ league (in addition to his own 65+ age group.)

-Working around the house, he now hoists and carries 40+ pound bags of water softener, no problem.

My energy level, which was flagging before I came to Loyalty Fitness, is now soaring!

In addition to all these physiological benefits, David LOVES his new bicep definition and the fact that he can now wear his teenage son’s medium shirts which he could never do before. He feels and looks more toned all over. In seeing his results, his wife Diana recently began working out at Loyalty Fitness as well!

Have someone you think would love Loyalty Fitness? Fill out the form below, and we’ll get in touch with them!